History of the American Evangelistic Association

The American Evangelistic Association was founded in 1954 by John E. Douglas, Jr. at Baltimore, Maryland.  Dr. Douglas was called to the ministry as a 16 year old boy and conducted tent meeting revivals around the country until he was 19 years old.  He graduated to stadium meetings and established a garnered a national reputation and following.  At age 19, Doctor Douglas became an ordained pastor in the Church of God.  Until 1954, he pastured in various places in the south.

To compensate for the highly political hierarchy in a major denomination and the limitations of their overseer systems for organizing and controlling grass roots pastors, in 1954, Dr. Douglas led a group of several dozen pastors in becoming become independent pastors and formed the American Evangelistic Association (“AEA“).  The AEA was granted 501(c)3 status by the IRS in 1958, as an unincorporated church and an association of churches and pastors. He appointed his father, Dr. John E. Douglas, Sr. as radio spokesperson for the ministry and started World Missionary Evangelism (WME.) Within 5 years, WME had a budget of over $35,000,000 and sponsored hundreds of orphanages around the world. AEA founded the Baltimore Bible School that grew to over 300 students studying the Bible to become pastors, Missionaries and church leaders.

In 1990, Dr. E. John Reinhold met with Dr. Douglas to investigate whether AEA would support a Christian medical mutual care ministry that Reinhold was consulting. A friendship was developed that matured over the next ten years.  In 1993, when Dr. Reinhold began planning the founding the Christian Care Ministry (“CCM”), a ministry that today has grown into 50,000+ members sharing one another’s medical bills, CCM was placed, by mutual agreement, under AEA’s 501(c)3 tax umbrella.

Dr. Douglas served on the Christian Care Ministry’s Administrative Board of Elders and he carefully watched the inter workings of CCM and liked the transparency and accountability structure. In the fall of 2001, Dr. Douglas asked his board to elect Dr. Reinhold as Chairman and President of AEA.   Dr. Douglas, the AEA’s founder, went to his Heavenly reward in 2002 although his wife,  Dr. Marjorie Douglas, continues to serve on the AEA Board of Elders to this day.

Through many years of association with Christian Care Ministry – and continuing today as an independent body – AEA continues with association members doing the Lord’s work across the United States, North America and the world. 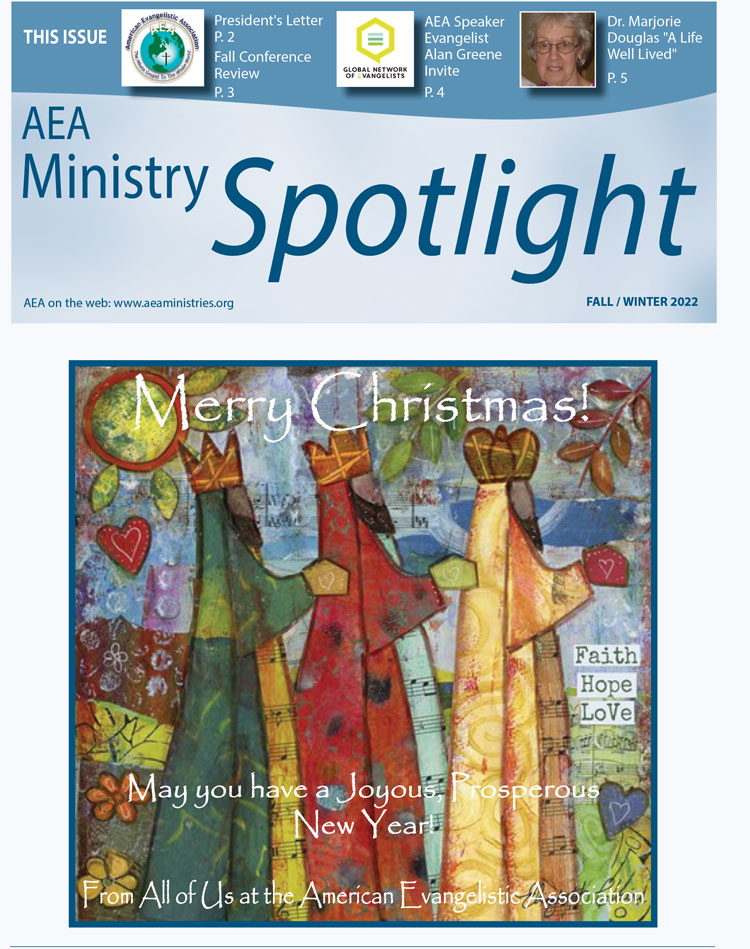